My Final Post- Touching Obituaries and An Emotional Meeting with Dharmendraji. 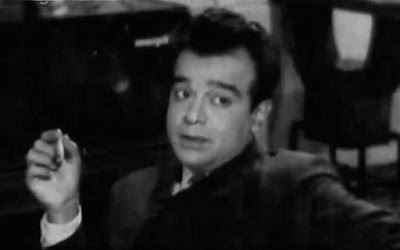 March 8, 2016 was the 44th death anniversary of my father. I started this blog to share all that I knew about my father and the world of cinema during his time. I knew that there were some diehard fans of old Hindi films who would enjoy this blog, beyond that I did not give it much thought. This blog’s unexpected success (going by the statistics) has been a pleasant surprise for me. I think any writer of non-fiction would be very happy to see his/her work being used as a reference material. I am no different, I was definitely happy to see writer Jai Arjun Singh include this blog in the recommended reading list in his book The World of Hrishikesh Mukherjee. 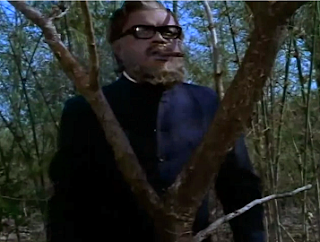 In this final post I would like to share a few things, one of them is the wonderful obituaries that were written about my father 44 years back when he passed away and I would also like to share the heartwarming and emotional experience of  meeting with Dharmendraji.

Those days television was yet to arrive in Bombay, therefore when my father passed away it was the press and radio that covered the news of his sudden demise. The common thread in all the obituaries was how popular he was in the film industry for example in the report below that appeared in Cine Advance the journalist observes, A sober man of amiable deportment, Tarun Bose was as much popular amongst the film folk as he was amongst the film fans.

Almost all the obituaries in various languages were quite moving, however for this post I have selected two of the  most touching obituaries. One appeared in Bharat Jyoti (below)  which used to be the Sunday supplement of The Free Press Journal, this was written by a journalist by the name of Ajab, I guess that was his pen name. 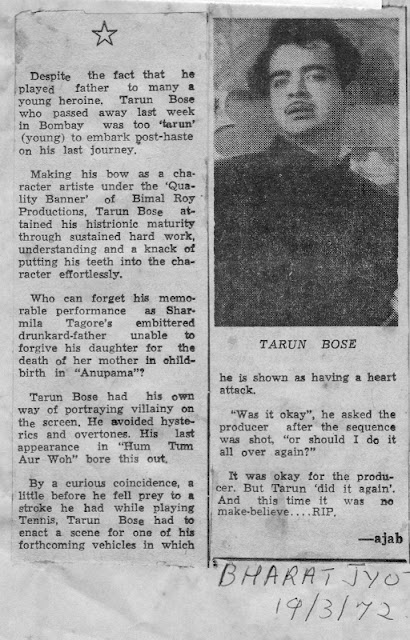 Here are some excerpts from his article.

Despite the fact that he played father to many a young heroine,  Tarun Bose was too ‘tarun’ (young) to embark post-haste on his last journey.


Tarun Bose attained his histrionic maturity through sustained hard work, understanding and a knack of putting his teeth into the character effortlessly.

Tarun Bose had his own way of portraying villainy on the screen. He avoided hysterics and overtones. His last appearance in ‘Hum Tum Aur Woh’ bore this out.


The other one is in Hindi, it featured in Madhuri. Apparently this journalist from Madhuri,  Mr. Lachiram Choudhary, knew my father during his Nagpur days. He wrote about dad’s devotion to his work and gave the following example: All India Radio was to broadcast a play ‘Narmada’—this was while he was still in Nagpur — the play was a 100 minute play in which dad was doing a cameo, rehearsals for the play were going on for fifteen days and Choudhary writes that although dad’s role was small he took a 15-day leave from work to rehearse for the play. Yes indeed to the casual onlooker it would appear to be deep devotion to his craft, but my mum used to say that he definitely did not enjoy his clerical job; it was just a means to an end. Therefore if he was given a choice of rehearsing for a play or going to the office, obviously the rehearsals won hands down. 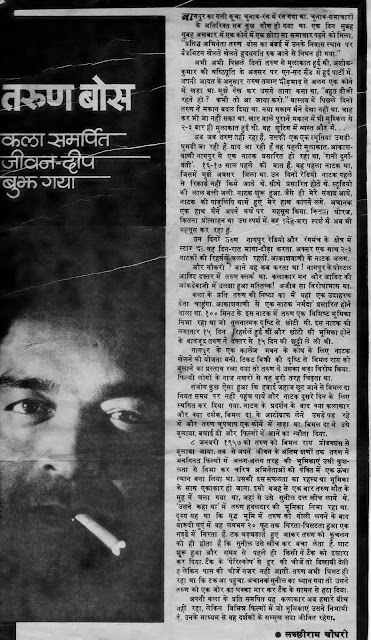 I am translating this little portion from Choudhary's article from which it is obvious to see the kind of impression my father left on people with whom he got acquainted. Choudhary recalled that he had got a break in a radio play. Plays in those days were not recorded but broadcast live. Since this was Choudhary’s first play he was nervous, he writes—‘the moment it was my turn to deliver the dialogue my hand which was holding the script began to shake. Suddenly I felt a hand on my shoulder; the touch was soothing and encouraging. I can still feel the warmth and affection of that touch.’ Choudhary was obviously referring to dad’s touch.
If you would like to read the articles, write click on the image and click on 'view image' and enlarge the image, you should have no difficulty reading it.

Back to Bimal Roy Productions
Rinki Roy Bhattacharya, filmmaker Bimal Roy’s eldest daughter, invited me and my brother  to the annual event held in memory of her father. She wanted us to be present along with some old timers who were going to be honoured at this event. She said that she wanted to honour our father's memory as he was a part of Bimal Roy Productions by gifting us with some mementos.


One of the yesteryear personalities (two of the other noteworthy names were Kamini Kaushal and Helen) to be honoured this year was Dharmendra. Meeting Dharmendraji at this event was an emotional moment for both my brother and me. His first reaction on learning that we are Tarun Bose’s children was one of joy, he expressed his deep affection for 'Tarunda' (that's how most film people addressed my father).  He expressed his sorrow at our father’s untimely death saying, “Tarunda bahut jaldi chale gaye." He further lamented, “woh din pakadke to nahin rakh sakte”( it is not possible to hold on to those days). Needless to mention a remark like that tugged at our heartstrings. Up on the stage too he expressed his joy at meeting us. So yes, it was a wonderful heartwarming evening for us.


On that day Rinki Roy Bhattacharya gifted us a copy of Sujata’s poster and her book Bimal Roy’s Madhumati – Untold Stories From Behind the Scenes.  To know about the book read my post Madhumati (concluding part)

After this satisfying journey, I take my leave from you all. Most of my father's films are available on YouTube. For his film list click on the Filmography tab above