The World of Hrishikesh Mukherjee - The Book by Jai Arjun Singh 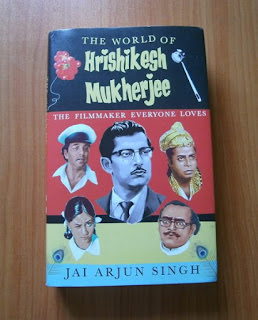 My previous post, was going to be my last post in this blog. I had just planned on giving this blog some finishing touches, give it the look of a regular website, that was about it. Then something interesting happened, I received an email from writer Jai Arjun Singh informing me that his book on Hrishikesh Mukherjee was going to release in a few days and that he would like his publishers Penguin India to send me a copy, if you are wondering why? Well he had written about my father and he had also taken a quote from my interview with Hrishikesh Mukherjee. Before I go any further about the book, I think it is only right that in filmy style I first go into flashback mode.


Some months after I started this blog, I received an email from Mr. Jai Arjun Singh informing me that he was going to write a book about Hrishikesh Mukherjee and that he would like me to share whatever my father had to say about the director. I was happy to share whatever I knew and of course he had already read portions of my blog. After the initial exchange of emails, I completely forgot about the book. In the meanwhile I completed Tarun Bose and the World of Cinema and moved on to my food world, that is my food blog It is Tasty Ma!

It was therefore a pleasant surprise when I received Mr. Singh’s email informing me about the impending release of the book. The icing on the cake was or if I were to use the Hindi phrase sone pe suhaga was me receiving the book right on my father’s 87th birth anniversary. I knew there was no way I was not going to include the book in this blog.

The book titled The World Of Hrishikesh Mukherjee – The Filmmaker Everyone Loves, takes a refreshing look at Mukherjee’s oeuvre. At the outset, that is in the prologue itself Singh clarifies that this is not a biography. He also goes on to say that his approach is not a chronological, film by film approach, what you see instead is an interesting thematic approach. Personally what appealed to me most was Singh’s delving deep into Mukherjee’s style of direction, the little touches that some of us do not notice but which go on to make an impact in our subconscious mind, so much so that we want to see some films over and over again. That is the approach I like to take when discussing any film.

Another thing that I liked about the book was that Singh has discussed at length some of Mukherjee’s not so successful films  like Biwi Aur Makan and Sabse Bada Sukh. Biwi Aur Makaan happens to be a personal favourite, I quite enjoyed the film.

I noticed Singh comes directly to the point without beating around the bush and he has an easy-to-read style of writing.

Since this blog is about my father I better come to the point. Anupama is a film that would obviously feature in a book on Hrishikesh Mukherjee, besides Anupama, he has also discussed Satyakam. I liked the way he has analyzed Mr Laadia’s (played by my father) character. I do not know how the character was reviewed by journalists at the time of the film’s release; I was a child then but as an adult this is the first time I have seen someone giving an apt description of the character. 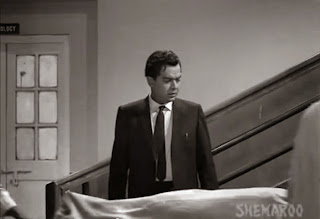 As far as Anupama is concerned what pleased me was that Singh chose to highlight one of my favourite scenes from the film – Mrs Sharma’s death scene. He has perfectly analyzed the scene, focusing on camera movements, sound design and my father’s expression.

Trivia lovers will also find interesting bits of trivia in the book.

As I had mentioned earlier, I will give this blog some finishing touches. Much as I enjoy blogging about food, I also enjoy discussing cinema therefore my brother and I are planning a film blog. No it will not be reviews; we would like to discuss short films and most importantly scenes from various films that have made an impact on us. Hope we are able to realize this dream soon.