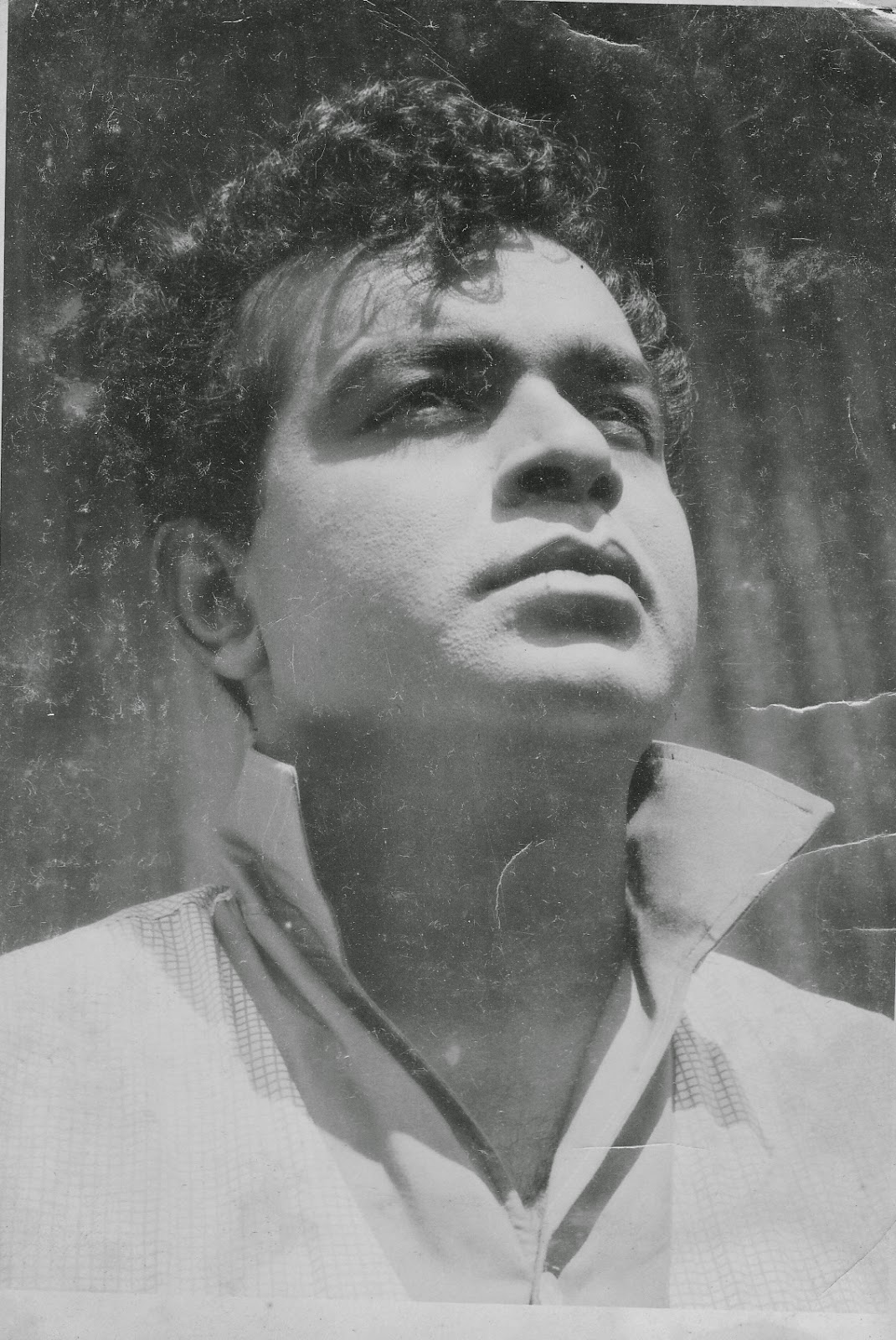 
When I  began with Memories & Memorabilia, I began with some amount of trepidation, I thought I should not allow my personal emotions to come in the way, that is, I should not let my heart rule my head. I was just going to share a few memories and wind up, but your comments and overwhelming response emboldened me to stretch it to four parts. Interestingly this blog’s statistics has stunned me. Initially it gave some competition to my food blog, but now it has raced ahead leaving my food blog way behind. I am surprised considering it focuses on just one person who passed away long ago and I did not do much to promote it. In this final instalment therefore, I am sharing all that I had not thought of sharing, I am now encouraged to share almost everything.


It is indeed amazing the number of things we managed to unearth, so here are some more pieces of sweet memories and memorabilia.

I concluded my last post with my father’s screen test. The next step was signing a contract with 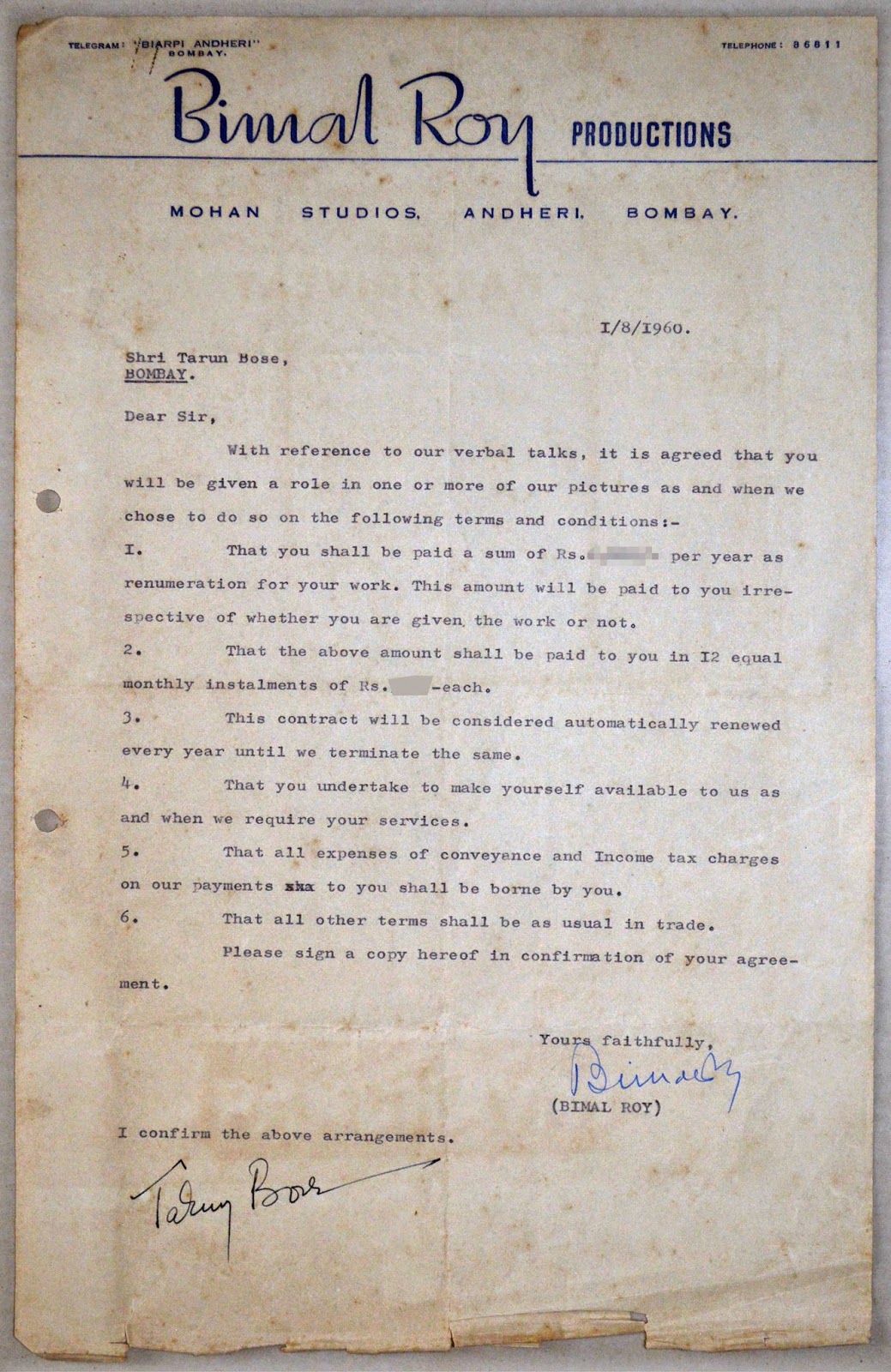 Bimal Roy Productions, we found a copy of that contract.Below is a photo of my father  at Sujata’s

Memories & Memorabilia (Part 2) - Glimpses into the past

It is amazing the amount of things we accumulate and cling to (they are sweet memories after all) during the course of our lives. It is a different matter that as we get on with our daily lives, we forget where they have been kept, that is what happened with us. My brother and I have decided to reduce the clutter and there is also a realization that it is time to let go of the past. We were, therefore, going through all that we had held on to for so many years and were happy to find some real interesting stuff related to our father. Today is my father’s 86th birth anniversary and I feel today is right day to share all that I have unearthed.

When I started on this list, I did not realize that I would be tempted to take it to 3 parts. I just could not help it, the songs those days were so good, the lyrics, composition, the rendition by the singers, everything was perfect. In my final post I have restricted myself to just eleven songs. I have highlighted a few of the lines that have particularly appealed to me in some of these songs.

When I did my previous post I was more or less sure about the songs that I would select for this post. I decided then that my next post would be a selection of songs that have struck a chord in my heart and songs that I have just liked because of the sweet melody and of course the lyrics. I, however, did not realize what a  tough task it was going to be. That was the golden era of film music, I just could not decide which song to select and which one to leave out. For this post I finally decided to select the songs that I like for their melody and I decided to stick to my father’s black and white films. So here is my list of songs.

Way back in the old days of black-white cinema and even during the early days of colour films, the directors were truly the captain of their ships. They took an active interest in every aspect of film-making, naturally therefore no song or dance sequence or fight sequence was  filmed in the absence of the director. During the eighties things began to change. I learnt that the directors handed over the reins to the dance director for the song and dance sequences and the action directors for the fight sequence. I was surprised to learn that the directors did not bother to be present on the sets or the location. Not surprisingly therefore, while the song and dance sequences blended with the film’s narrative in the past, later on and even today, the songs appear from nowhere and look more like music videos. The dance sequences remind me of aerobic exercises.

How I miss the dance sequences of my childhood. Back in my childhood I heard names like Lachhu Maharaj, Gopi Krishna, Sachin Shankar, all of whom were legends to whom filmmakers turned when they wanted a choreographer. While most of the choreographers were accomplished and respected classical dancers, there was Sachin Shankar a cousin of sitar maestro Pt. Ravi Shankar who had trained under the legendary Uday  Shankar (Ravi Shankar’s elder brother). Shankar’s area of expertise was dance ballets and dance dramas. His shows ran to packed houses.

Those of you who have been following my blog will remember that I had unlocked some precious memories some months back. There was one person who was an integral part of those memories and that person was the late director of photography Kamal Bose. As soon as you are born some people automatically become a part of your life for instance, your parents, grandparents, siblings and so on. For me along with my parents and sibling, Kamal Bose became a part of my life as soon as I was born. He was the paternal uncle I never had. My parents and he shared a wonderful bond almost as if he were a blood relative.

Like I mentioned in my last post there were a few film personalities I wanted to interview, Kamal Bose was one of them. He was one of the leading cinematographers of the industry. He had won five Filmfare Awards - Bandini (1963), Anokhi Raat (1969), Khamoshi (1970), Dastak (1971) and Dharmatama (1975). 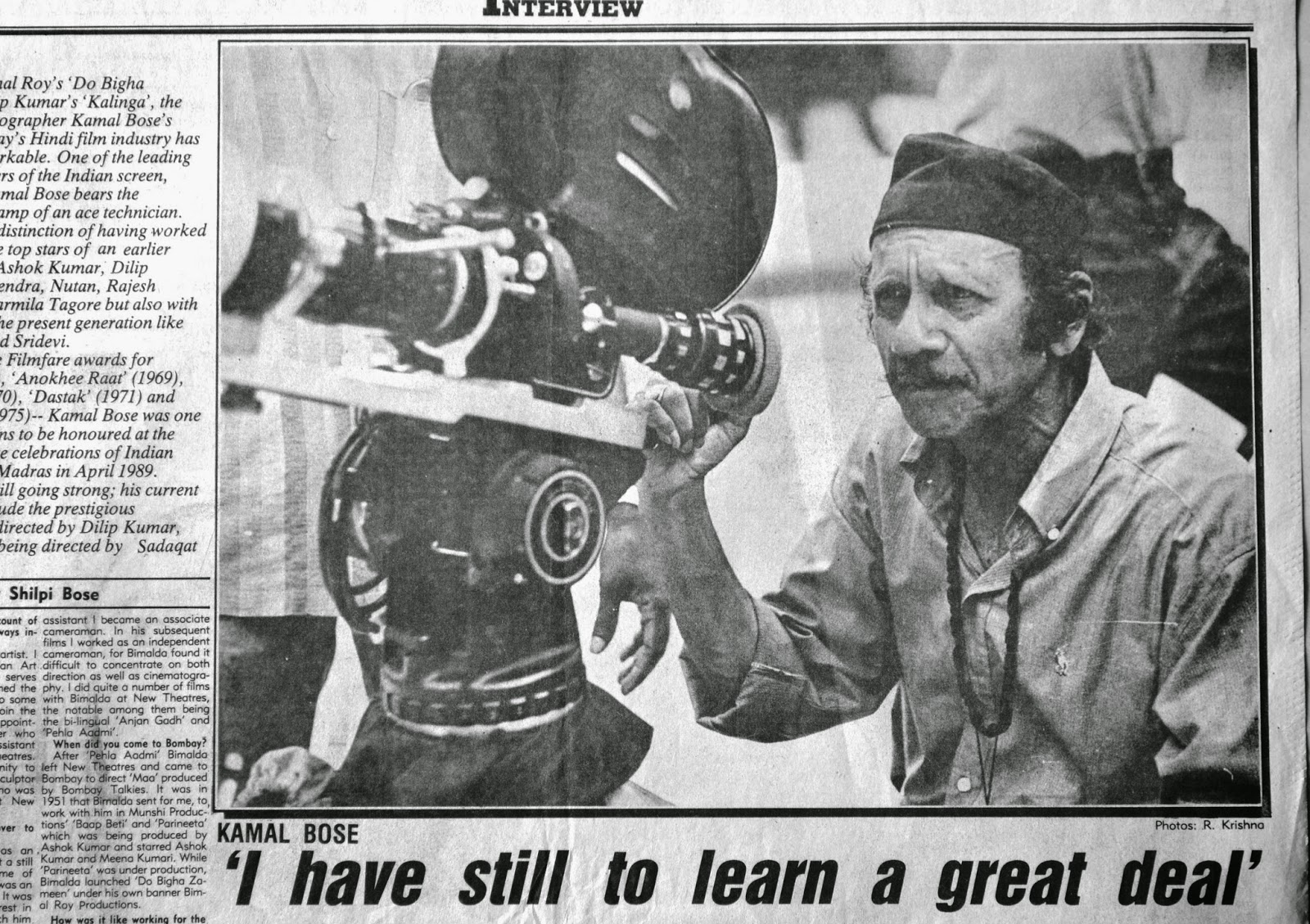 Once again I am back after a long break, I was away but as they say better late than never.  Incidentally some of you maybe confused at receiving an update but not finding anything here on my blog,  I noticed an increase in my statics on March 24th, a clear indication that several visitors came looking for a new post. I will clear the confusion, my laptop has a  mind of its own, while I was working on this post the cursor jumped and hit 'Publish' and my incomplete post got published. I had to immediately delete the post, I apologize for all the confusion that I unwittingly caused. 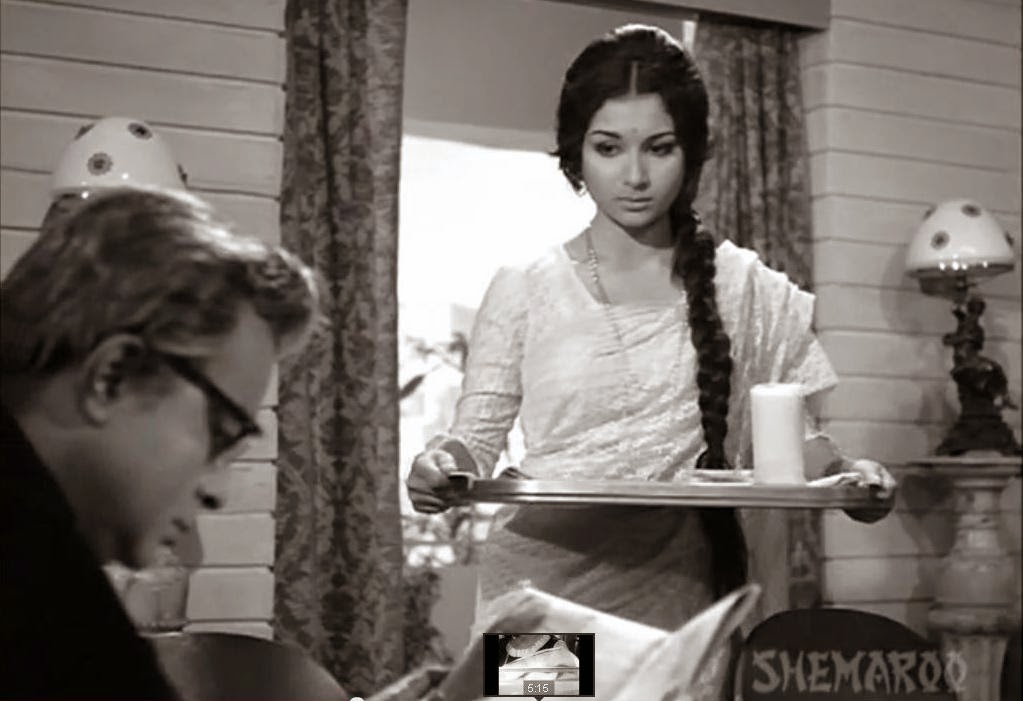 Right from my childhood I have noticed that the roles which attract the attention of the audience are author backed roles. My father's role in Anupama was so good that it overshadowed almost all his other films. Tarun Bose became synonymous with Anupama and Gumnaam.

My father was not the first choice of the film’s makers. The film was first offered to Ashok Kumar, he turned it down, why? I have no clue. Then they approached Abhi Bhattacharya, he turned it down because he did not like playing a father, finally they offered the role to my father.

This was a real long break, I am sorry, I was away attending to some work. 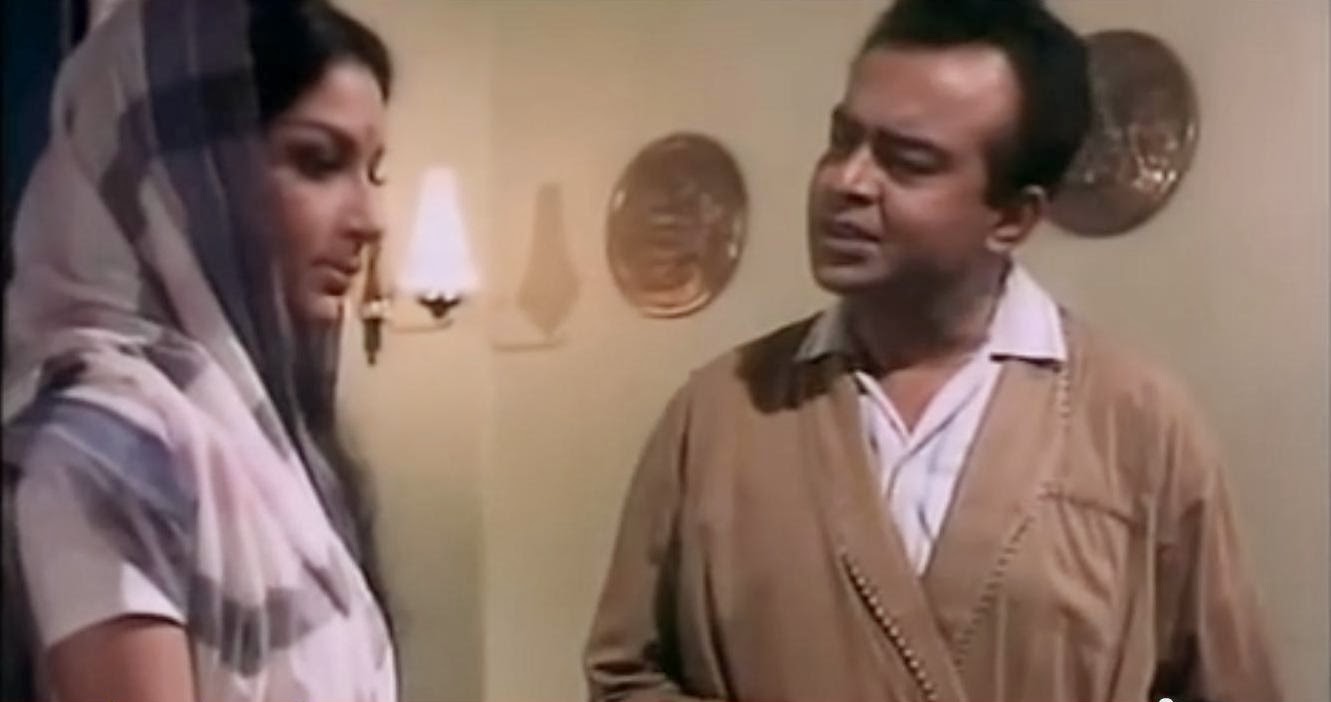 Bimal Roy was my father’s favourite director, he revered him, however, besides Roy, there were some other directors with whom my father enjoyed working and Hrishikesh Mukherjee topped that list.

Those days Mukherjee was acknowledged as the industry’s  best editor. He used his editorial skills to great effect while directing his films. My father used to say, “Hrishida edits the film in his mind while directing a film”. He was at ease both with comedy and serious films. While I surreptitiously wiped my tears after watching Aashirwaad, Satyakam and Anand, I found myself in splits while watching Chupke Chupke. Usually when I see the Hindi remakes of Bengali originals, I usually prefer the originals, but as far as Chupke Chupke was concerned I loved Hrishikesh Mukherjee’s version, the Bengali version was absolutely tame in comparison.

Despite being an ace technician he did not resort to any gimmickry to draw attention to his ability, he indicated his brilliance through his precise editing, unobtrusive camera placement and beautiful shot compositions. His focus was the film’s story, therefore the audience was able to identify with the characters and participate in their joys and sorrows. I had the opportunity of interviewing Hrishikesh Mukherjee for the