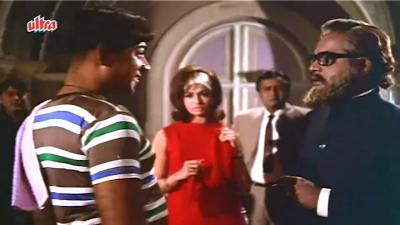 "Kaun hai woh, aahkir woh saamne kyon nahin aata” gumnaam hai koi badnaam hai koi... Gumnaam!
If you are wondering what was all that about, well that is one enduring memory that I have of my childhood. Actually to be honest the memory was a very faint memory, my brother sort of filled in the details. That sentence above is the line from Gumnaam’s radio spot. “Kaun hai woh……” was the dialogue that my father repeated in the film. Those were the days of radio spots, there was no television or internet but of course there were billboards too, which some ‘smart-alec’ used to disclose the murderer’s identity. He circled the murderer and wrote ‘Murderer’. But that did not deter the audience, surprisingly this was one of those suspense films which had a huge repeat value. People saw it again and again even when there was a re-run. Not surprisingly therefore, when people talk about my father they associate him with Gumnaam and Anupama. I do find it disappointing that his other films are ignored but I guess it cannot be helped considering that both the films had him in author backed roles.

Though most of you may have seen the film, I am just giving a brief outline of the film which was inspired by Agatha Christie’s ‘And Then There Were None’. I say inspired because Gumnaam’s story is a little different from Christie’s novel although the basic premise is the same. 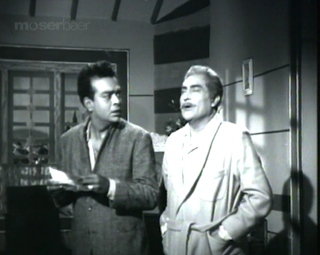 When we watch a film, I think, what appeals to most of us is the manner in which the director narrates the story and how well the actors have interpreted their characters. Some directors are pretty skillful in their narration while others resort to straight forward story telling. Oonche Log directed by Phani Majumdar is more or less straight forward story telling, where the film scores is in the acting department. Please excuse me, I may sound a bit prejudiced but I do think this is one of my father’s best performances. Unfortunately nobody mentions this film for it sank without a trace, my brother says it ran for just 6 weeks. It is unfortunate really for almost everyone performed well but to me personally besides my father, it was Ashok Kumar who gave a mind-blowing performance as the visually challenged Major Chandrakant.