January 8, 2013 was the 47th death anniversary of the master filmmaker Bimal Roy. Way back in 1991 I wrote an article(it appeared in the film weekly Screen) to mark his 25th death anniversary.I had discussed Bimal Roy’s films in considerable detail. 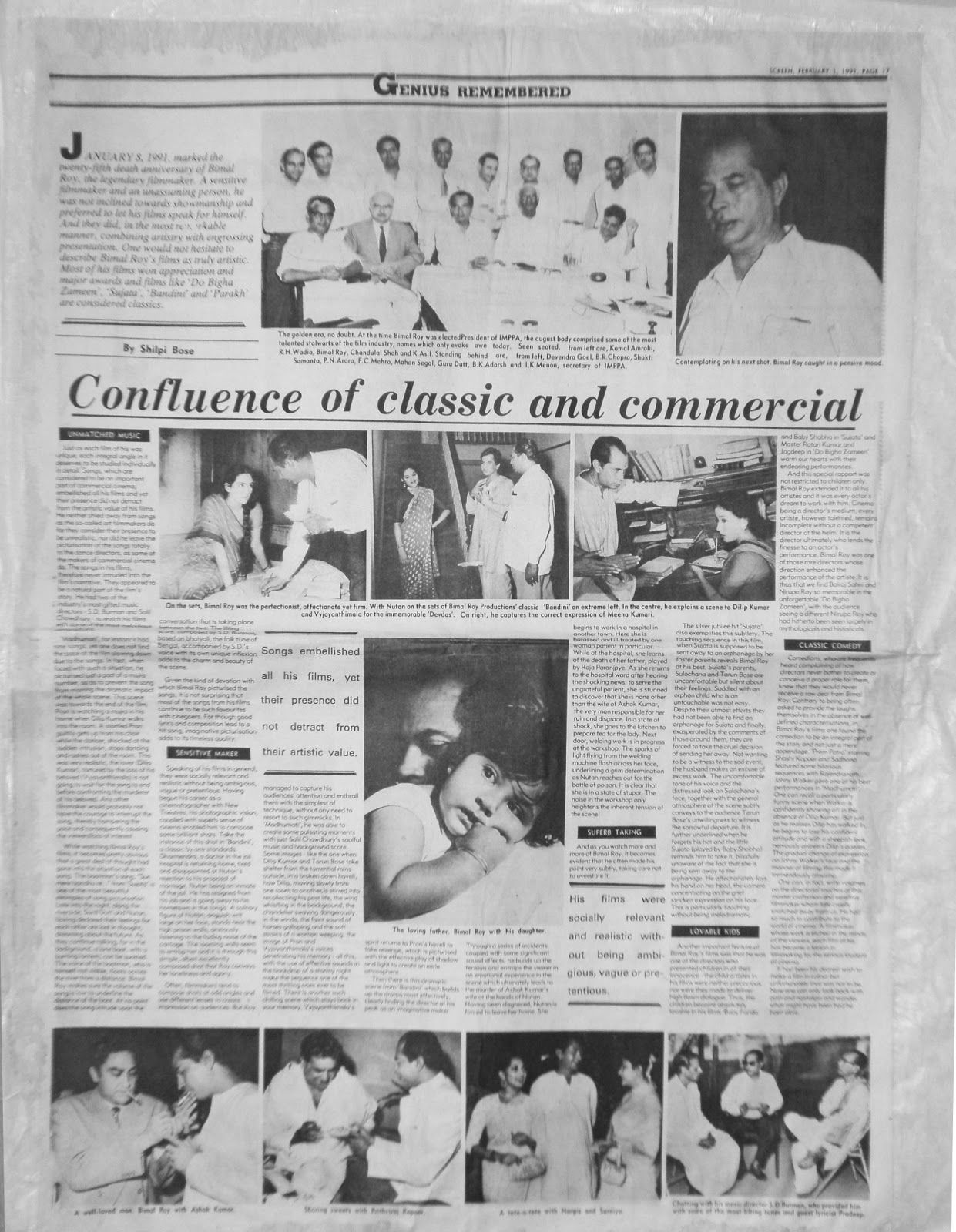 Screen’s editor Udaya Tara Nayar embellished the article with some rare photographs that she had dug up from Screen’s files. One of the photographs (see below) is that of Bimal Roy with his youngest daughter,

this photograph was taken by Mrs Monobina Roy (Mrs. Bimal Roy) who was herself an accomplished photographer.  Mrs. Roy and members of Bimal Roy productions- who were still around then- called me up to show their appreciation. Despite all the appreciation, I remember feeling a little frustrated because I was unable to supplement my article with the relevant stills from the films I had discussed in the article. The article felt incomplete; however today thanks to modern technology I can do a better job with the help of screen caps and clips.


Bimal Roy was a sensitive filmmaker, an unassuming person, a man of few words, a very affectionate man who did not indulge in showmanship. He preferred to let his films do the talking. His films were socially relevant without being pretentious. Most often than not commercially successful films are panned by the critics but that was not the case with Roy’s films, most of his films were successful and were also critically acclaimed for their artistic presentation.


Bimal Roy began his film career as assistant cameraman at New Theatres. He later went on to become a cinematographer. Some of his noteworthy films as cinematographer at New Theatres were both the Hindi (starring K.L. Saigal) and Bengali (starring P.C.Barua) versions of Devdas .He took the film world by storm with his maiden directorial venture Udayer Pathey in Bengali and Humrahi its Hindi version. 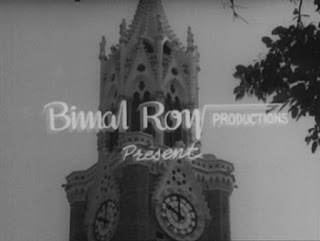 The choice of Rajabai Clock Tower is I think very apt, after all the film industry is located in Mumbai (Bombay) and I believe the tower perfectly  symbolizes the city. In the picture below you see the tower, in the foreground is the Oval Maidan where youngsters play cricket and other outdoor games, in fact you can see former cricketer Dilip Vengaserkaar coaching little boys at this ground. 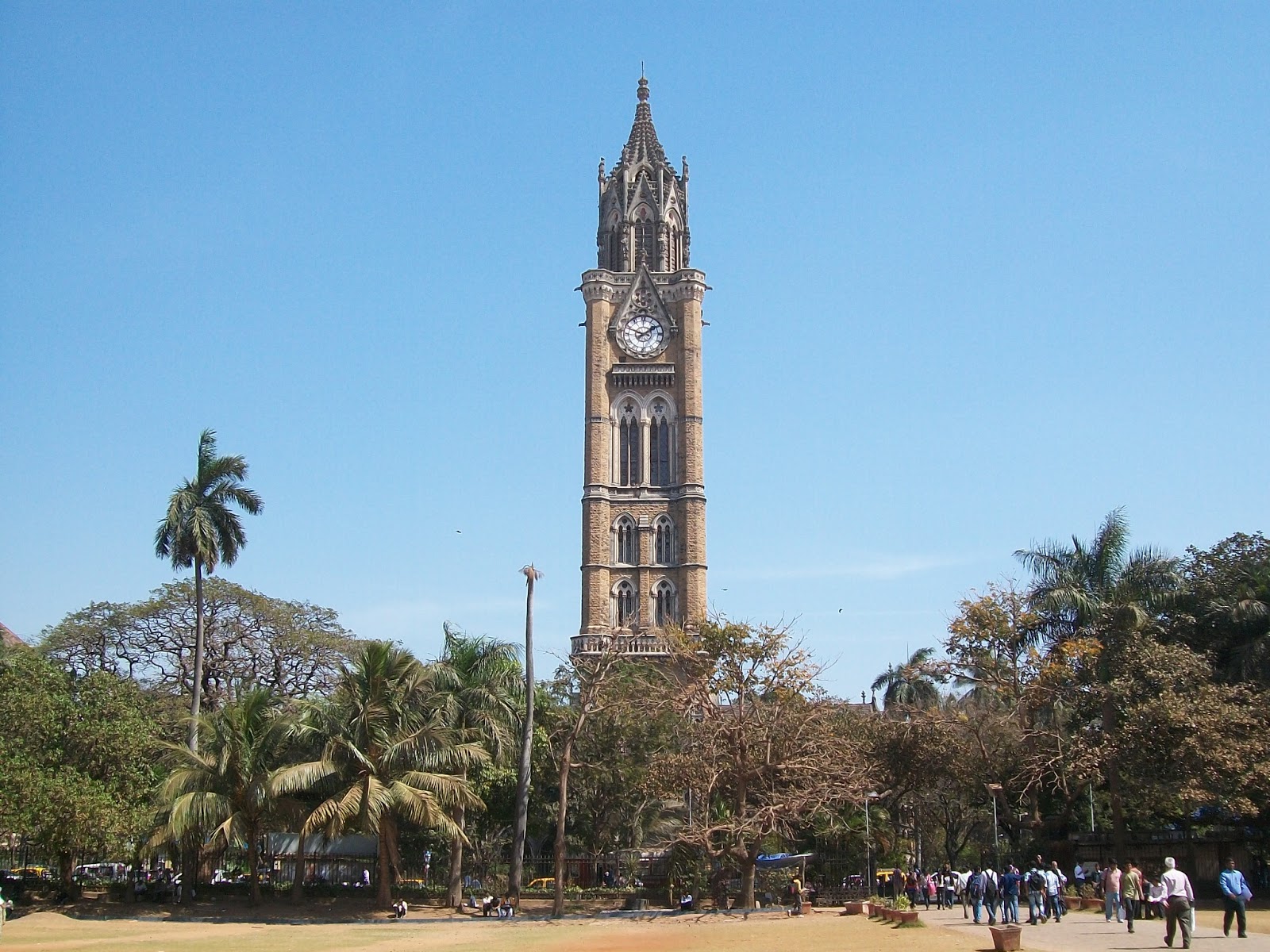 I was a little kid and therefore have a very faint memory of Bimal Roy but his memory was kept alive at home by constant discussions about him and his films.

I have chosen Bandini for my first post on Bimal Roy because I feel this film serves as an excellent lesson in filmmaking for any student of cinema.


But before I move on to the film, I would like to share some anecdotes from the film. Those of you who have read my guest posts for Memsaabstory may recall seeing the still below. 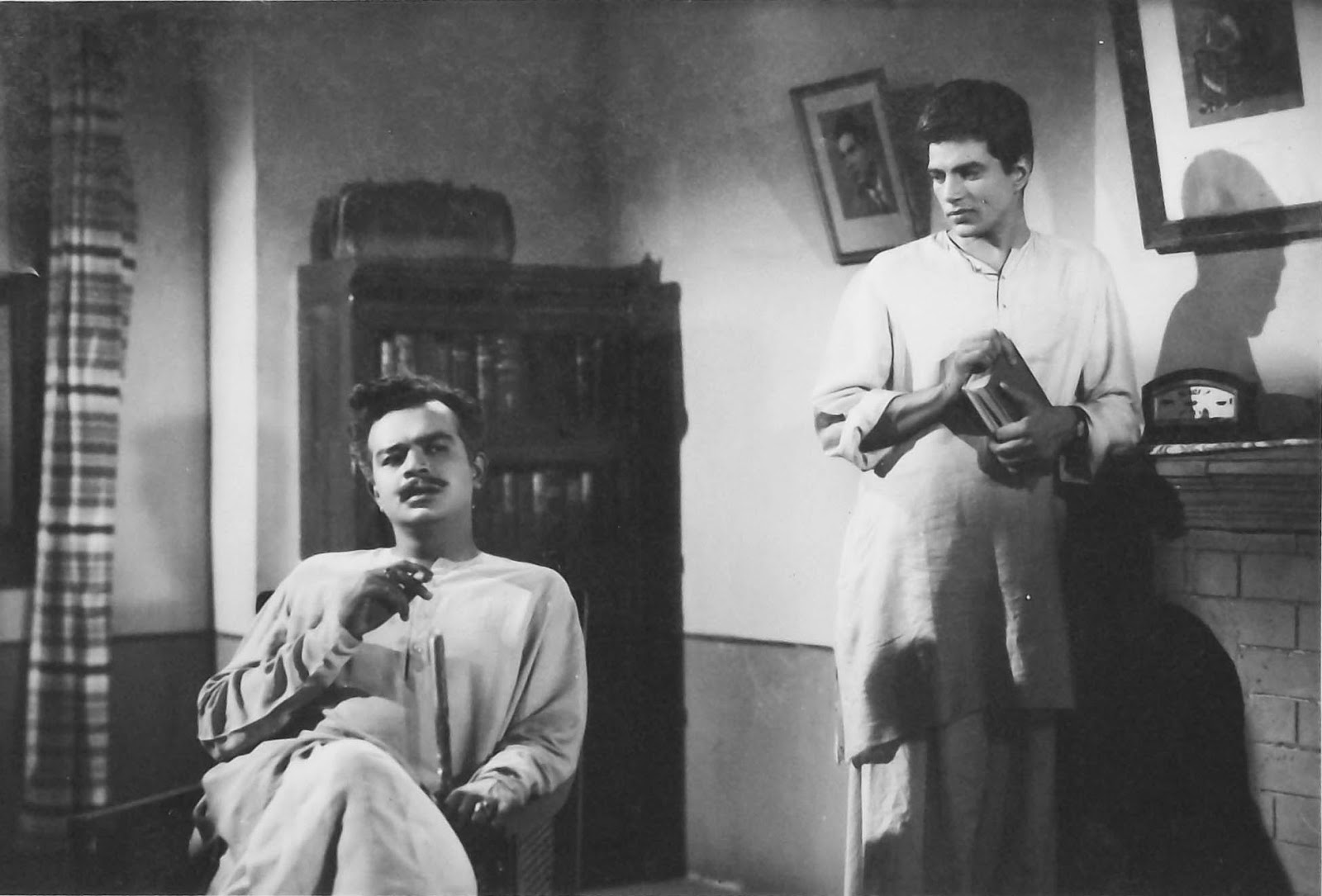 That is my father with a very young Dharmendra in Bandini. This scene was obviously edited out for I never saw this scene in the film.  I would like to share what Dharamendra told dad when both were new to the industry. At this time by no stretch of imagination could they be called rich. Dharmendra made a pact with my father while travelling with him in the local train; he requested my father to pay for his ticket while he would pay for his own and that neither he nor my father should bother to offer to buy the other's tickets, a courtesy which most people extend to a friend but in this case being short of money, such a courtesy would be strain on their limited funds.


While on my father and Dharmendra, in the screen cap(below) from Bandini you see my father in layers of clothing. 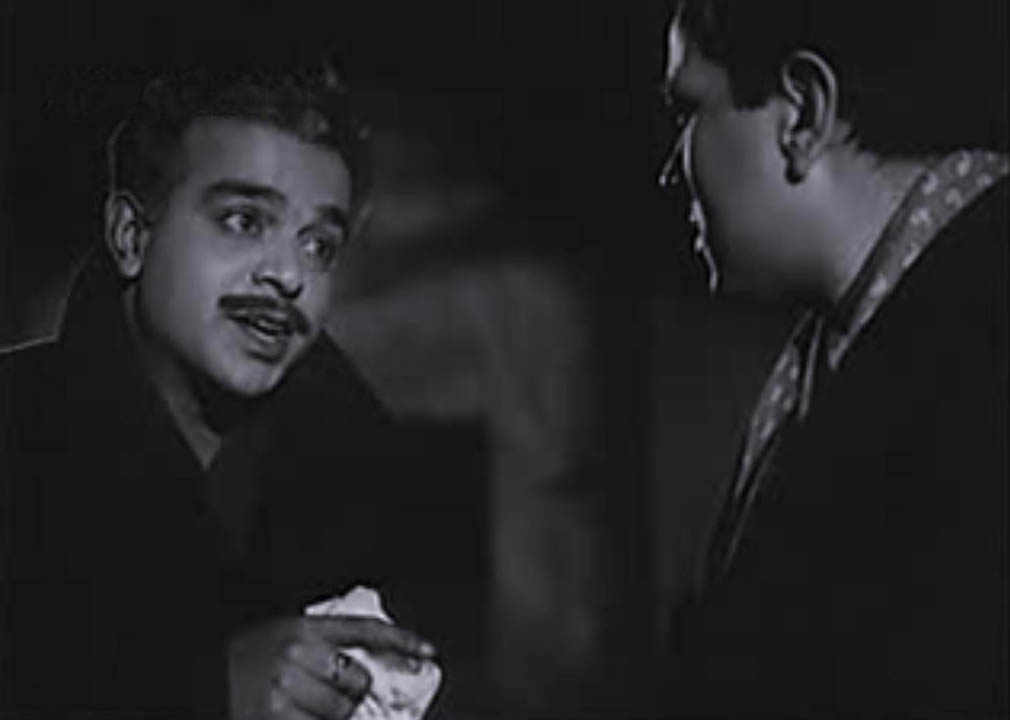 He is actually wearing a very heavy overcoat which Bimal Roy had purchased from Russia and is ideal for that country’s severe winter. The jail in this scene is supposed to be located in Allahabad and  the season is winter hence the need for that heavy overcoat, the only problem , they were not shooting in Allahabad but  at a set erected in hot and humid Mumbai or Bombay as it was known  then. In this scene my father asks Dharmendra  -- who plays a doctor – to hurry up, for he (my father) may land up in hospital if he has to wait for too long in the cold. What was most amusing was while  my father was delivering this dialogue about the cold, Roy noticed sweat trickling down my father’s face, he immediately called, “Cut”, and instructed someone to wipe the sweat off his face – well who said acting was easy?  To watch this scene, click here. You will see it approximately at 2:24.

Another anecdote that I heard from the people connected to Bandini was about the scene below. 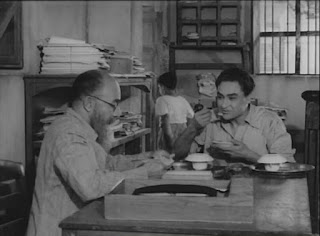 Here you see Ashok Kumar relishing some halwa, unfortunately for Ashok Kumar, the unit member who organized the halwa did not check the halwa’s quality- the halwa had gone stale. This reminds me of a similar experience my father had while shooting a wedding sequence for Jyot Jale. He played an alcoholic in this film, his wife Nirupa Roy throws him out of the house. Once out of the house and without a job, hungry and completely shattered, he (my father) gate crashes a wedding and hungrily stuffs some puris in his mouth. For some reason (I do not remember why) we were there at the shooting and I remember seeing dad spitting out the puris the moment the shot was over, he said the puris were absolutely stale.


In the screen cap below you see my father reading, there is a close-up of his hands and you can see his favourite ring. It had a small kukri, later the kukri fell off and my father exchanged the ring for another one. 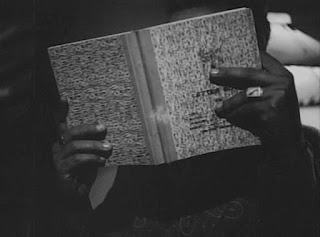 Hope you enjoyed these bits of trivia. Having finished with the trivia I will move on to the film in my next post. No, it will not be a review; I leave that to the experts. What is it going to be? Well, watch this space while I pay some attention to my poor neglected food blog.
Posted by Shilpi Bose at 06:09