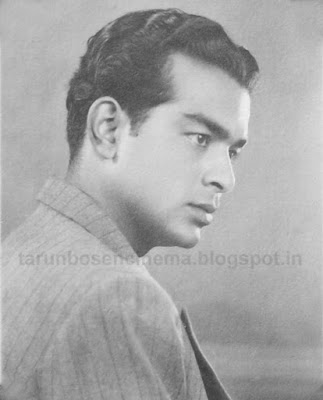 My father passed away on March 8, 1972, the day following my birthday. One day our house was full of people and laughter and the following day too it was full of people and film stars only this time there was no laughter only tears. Recently my neighbour was telling me," I remember Rajesh Khanna crying, I was trying to console him, your father was truly loved by everyone". Yes he was. Since March 8 just went by I thought it was okay to interrupt my posts on Bimal Roy and unlock some personal memories. I raided the cupboard and decided to post some of those precious memories right here.

My father was born on September 14, 1928, that is a long time ago, those days cameras were not as ubiquitous as they are now, therefore we have only a few photos of his childhood.

He was about four or five years old in this photo you see on the left, he is seated on somebody's lap. I can almost see the future actor in those expressive eyes.

The Dog Lover
My father loved dogs and my brother has taken after him. His first dog was named Jack. Dad brought home Jack when he was a little puppy and comfortably fit into his coat pocket. Winters in Nagpur where my father was brought up can be quite severe and it was one winter that dad carried the little pup in the pocket of his coat and brought him home.In the picture below (right) he is seen with Jack. 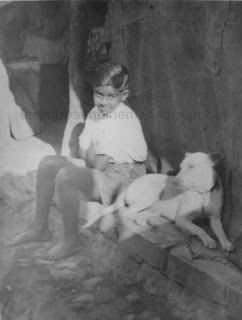 After Jack Lalu walked into my father's life. He was special, on cold winter nights he insisted on sharing dad's bed and quilt. A slight sound outside and he would jump up barking taking the quilt with him leaving dad shivering. After dad's marriage he became mum's close companion and later my brother's caretaker; yes caretaker, when my brother slept my parents warned Lalu,"No sound the child is asleep". Lalu obeyed but did not hesitate to start barking when he saw a little sparrow chirping, he probably thought the bird'ds chirping would wake up the child.

In the picture below Lalu is seen with my cousin who  now leads a retired life. When this picture was taken the Bengali film Lalu Bhulu (it was the original version of the Hindi film Dosti.) had just released so this photograph was named Lalu Bhulu. 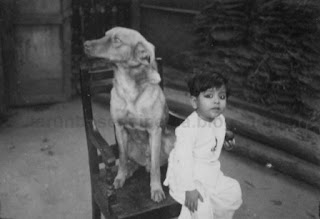 Passionate Actor
Right from his childhood  my father was passionate about acting, all he ever wanted to be, was an actor. During his college days he was the secretary of the drama club. In the picture below he is seen with his college mates and I think the priest seated in the centre is the college's principal. 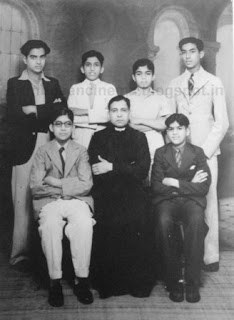 Dad is standing at the back  (extreme left)

Marriage and Children
My parents got married in 1949. The picture below was taken a year after their marriage. 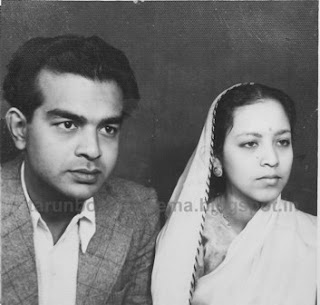 Two years after their marriage my parents were expecting their first child and the doctor set the delivery date sometime in September. Dad was thrilled. He later told me,"You know Shilpi I was so thrilled I was hoping the child would share my birthday." It was a son born on September 5, but unfortunately the child passed away soon after he was born. It was a loss my father never really got over. However, happiness soon came into their lives in the form of this little fellow. Doesn't my brother look absolutely cute in the pictures below. 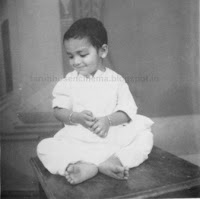 Stage - The Love of his Life 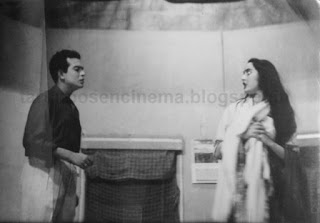 Marriage, child and a full time government job did not keep him away from acting. He directed as well 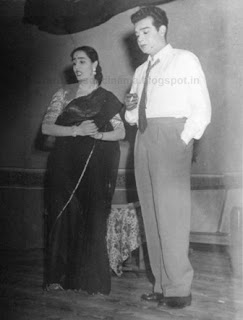 as played the lead in several plays. Once he went to Calcutta and saw the hit play 'Ulka'. There was a Bengali film too based on the same story. The film was later remade into Hindi as 'Meri Soorat Teri Aankhen'. My father was bowled over by 'Ulka'. He decided to stage it in Nagpur, he directed it and played the lead that is, he played the role which Ashok Kumar played in the film. The play was a hit and his acting, direction as well as his make-up of an ugly man came in for a great deal of praise. I do not have any photographs from 'Ulka' but the photos above are from some other plays he did while still in Nagpur. The photographs below are from some of the plays he did in Bombay. 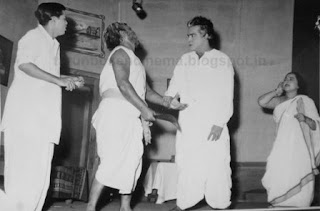 I never saw him act on stage, by the time I grew up he had already given up stage acting. Acting both in films and on the stage was taking a toll of his family life. My brother though, has few wonderful memories of those days. 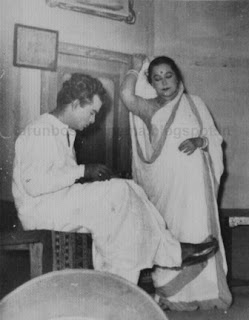 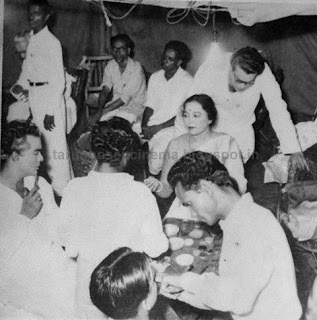 This is a picture of the green room, my father is seated (extreme left) with pipe in hand.

I did mention he held a government job. He worked in the Post and Telegraph department. In the picture below, he is seen with his office colleagues being introduced to the Governor, my father is standing on the left. 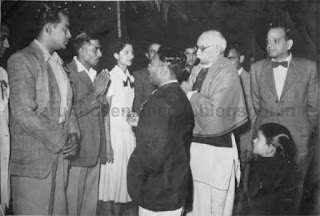 The Film Industry Beckons.
Opportunity knocked on his door when the principal of Nagpur's St. Francis School approached my father and his friends with the request to stage a play; they were going to start a college and they needed funds for the college building. The friends zeroed in on a successful play 'Aur Yeh Insaan'. there was a major hitch however, the play had been staged several times so the question was, will the people purchase tickets to see the play again? A famous chief guest  could solve the problem, people would eagerly go to see the chief guest and who better than a film personality? They decided on Nutan but she declined as she was busy, the next film personality on their list was Bimal Roy. My father would have none of it, he was cynical about  film people. He said film people have their nakhras (I do not know how to translate this word into English). He felt his stand was vindicated when Mr. Roy failed to arrive on the appointed day, he had missed his flight. Needless to mention, my father had this "I told you so" attitude. He told mum, "I told them but they just won't listen to me, now see the play has to be cancelled". Thank God, his friends did not listen to him, the play was finally staged on another day and this time Bimal Roy made it. Who benefitted from all this? My father of course. Soon after the play ended, Roy approached dad and made him an offer to act in films. Finally my father saw his dream of being a film actor coming true.

Below are scenes from the play, this was a serio-comic role, my father loved playing such roles, unfortunately he did not get too many of them in films. 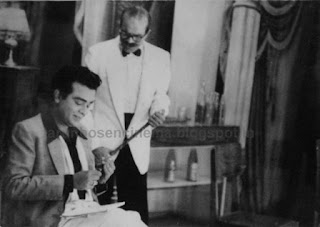 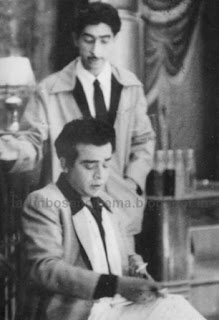 A New Life
Life in Bombay was wonderful for my parents. Below he is seen with Abhi Bhattacharya probably in a studio compound,sometime during those early years in Bombay. 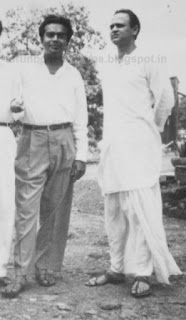 Life for my father was however not complete, had he been alive today, he would have been the perfect ambassador for the girl child. He did not have a sister and he missed one all his life. He missed not having anyone tying a rakhi or applying the auspicious tilak on his forehead during bhai dooj. When he learnt that mum was again expecting a child he desperately prayed for a daughter. His prayers were answered and yours truly entered his life.

(Left) I was ten days old, (centre and right) about four or five months old on a family picnic at Elephanta caves.

My father was so happy that he would show visitors my tiny dresses drying on the clothes. He would say,"Doesn't the home look wonderful with a little girl's dress".

Yes I was pampered and I think it is apparent from the two photos below. I was a little less than two and my brother recalls that my father wanted me to pose with the doll but I just kept the doll aside and insisted on taking the cover of the camera's lens in my hand. 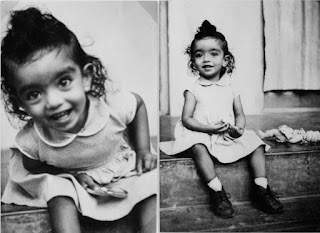 ﻿
My father is seen here lighting his cigarette with his favourite lighter. I wish he was a 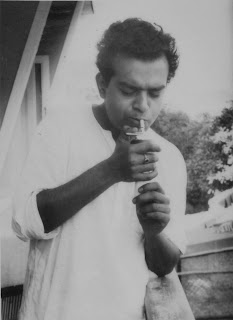 non-smoker like my brother,  he would have lived longer and not lived up to his name, Tarun after all means young. Cigarette smoking is truly injurious to one's health. 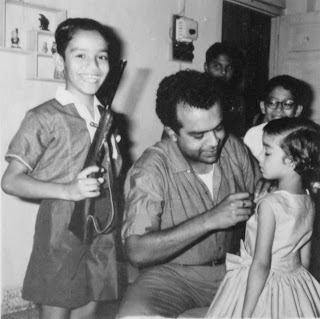 The photographs above and below were taken on my brother's birthday. My father is pinning the Indian flag on my dress, you see my brother was born on Republic Day, January 26. My brother is standing beside him. In the photo below you can see the silver jubilee trophy of Sujata, it is the silver plated sunflower right on top of my father's head. 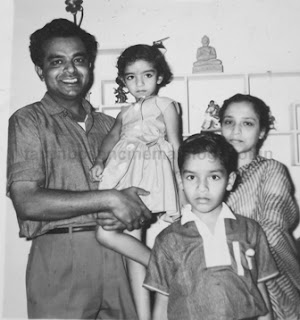 I had a grand birthday celebration in 1970, this photograph appeared in the film weekly 'Screen', I stumbled upon this paper cutting and I felt like sharing it, for this was the last time I celebrated my birthday. 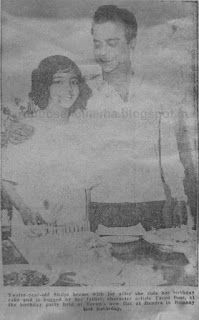 My father was a fun person, he became a child with kids, see the photo below, he is at his mischievous best here. I have watched actors closely and one thing that I have noticed about them is that in the presence of a photographer they automatically tilt their head to the right angle. I am sure they are not even conscious of doing so, my father was no different but here he went all out to have some fun. The lights were switched off  and my father flashed the table lamp on his face from below and my brother clicked this lovely photo. This was taken approximately a year before he passed away. 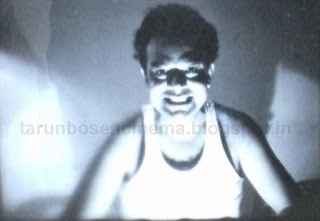 I end with this photograph, this was the last picture that my brother took of dad. He was going out for a formal dinner party. 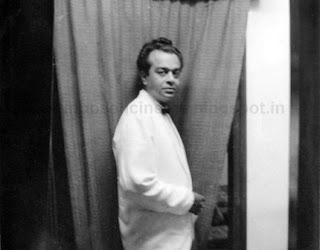 I will be back with my posts on Bimal Roy and this time I will be discussing Sujata but as usual I will take a little time, so please bear with me.
Posted by Shilpi Bose at 07:47