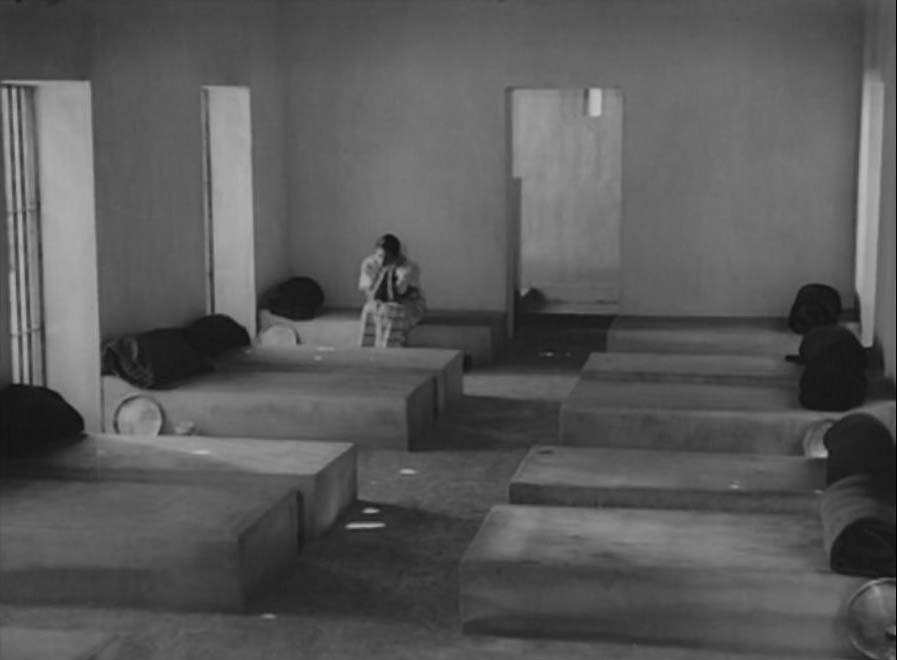 In my last post I did say  that I would not be reviewing Bandini, in fact this post and all the future posts on Bimal Roy will be a sort of film appreciation- appreciating Bimal Roy - the director.

Bimal Roy’s vision was that of a true artist. He never over dramatized or over emphasized a scene, his direction was understated and he handled the emotional scenes with utmost sensitivity and in a subtle manner. His brilliance as a cinematographer was reflected in his brilliant shot compositions. There are some directors, who, in their bid to show off their directorial skills, indulge in some peculiar shot compositions – almost telling the audience, “Look what a great director I am, just look at this brilliant shot composition”. Roy refrained from such directorial stunts- if I may put it that way. Before I delve deep into Bandini, I have to give a brief synopsis of the film for the benefit of those who haven’t seen the film.


Bandini is based on a Bengali novel ‘Tamasi’ written by Jarasandha. Jarasandha was the writer’s pen name. He was a jail superintendent and it was his job which provided him with the story ideas for his novels. He wove his real life experiences into his stories. In Bandini for instance there is a sequence where Ashok Kumar who plays a freedom fighter is arrested. 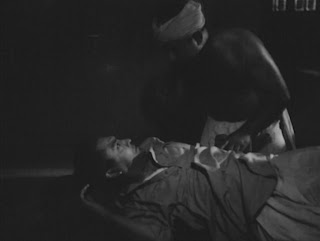 He is fast asleep in his cell when a man wakes him up and helps him escape from the prison. 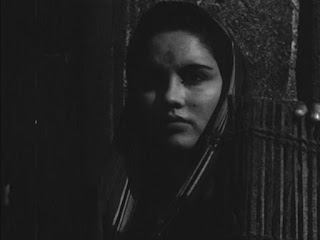 Ashok Kumar is later surprised to learn that the keys to his cell were provided by the wife of a policeman, an ordinary simple housewife. 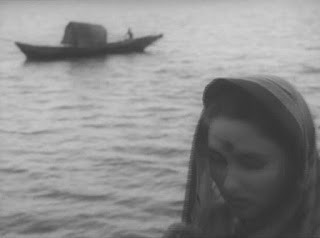 She has silently helped several freedom fighters escape. This sequence was inspired by what Jarasandha had observed while he was working as a jail superintendent. 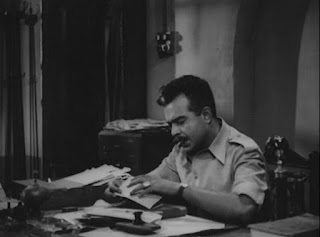 The jailer’s character, played by my father was based on Jarasandha. The story was written from the jailer’s point of view, it was fiction but Jarasandha wrote it in the first person, at least, if I remember correctly, that is what my mother told me. She was my window to Bengali literature. 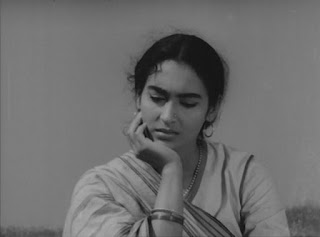 Bandini is the story of Kalyani (Nutan) a simple village girl. 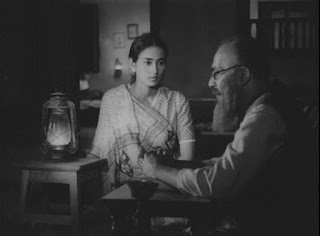 She lives with her father (Raja Paranjape) who is the village postmaster. 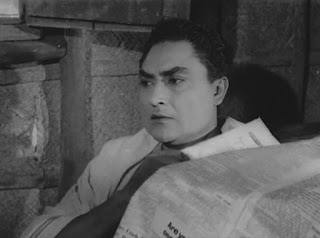 Bikash(Ashok Kumar) a freedom fighter walks into their life. 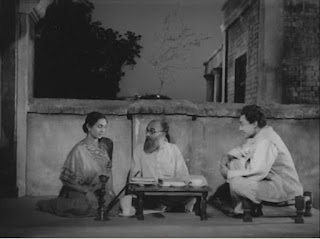 He has been kept under strict police surveillance in that village but has been allowed to hobnob with the post master. 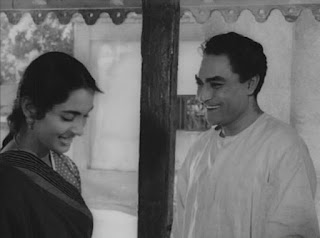 As a result of these visits Bikaash and Kalyani come close. 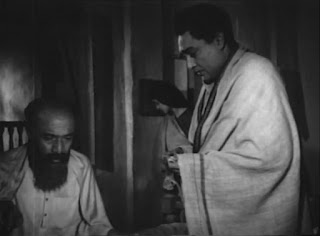 Soon tongues start wagging but Bikash assures the postmaster that he will marry his daughter. He leaves the village promising to return as soon as he is set free by the law. He does not return and Kalyani learns he has married someone else.

Not being able to bear the rude comments of the villagers and her aged father’s pain, she leaves home one night and takes up a job of a maid servant in a hospital. 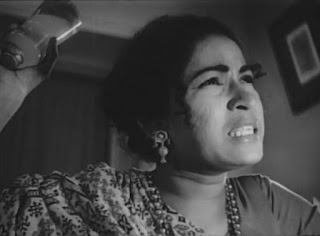 Here she has to tend to a patient of hysteria a very obnoxious woman. One day she learns that this lady is none other than Bikaash’s wife. A series of events leads Kalyani to poison the lady.

She confesses to her crime and it is while serving her prison sentence that she comes in contact with the prison doctor (Dharmendra). 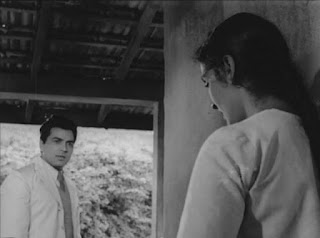 The doctor falls in love with her but Kalyani rejects him not wanting him to suffer the humiliation of being the husband of a murderer. 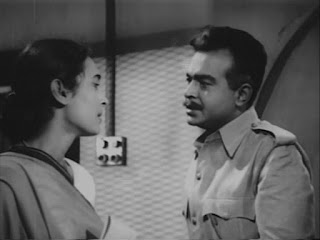 However, the jailer later convinces her to accept the doctor’s proposal.

Most of the film’s story unfolds in a flashback, in fact this film has a flashback in a flashback. First  Kalyani tells her story to the jailor and within this story you see Bikaash telling Kalyani how a policeman’s wife helped him escape. When it came to flashbacks Bimal Roy took utmost care to see that the story unfolded strictly from the point of view of the person telling the story. Many a times you may have noticed directors loosing track and coolly including scenes that the person narrating the story would not be aware of, these directors conveniently forget (or do not bother) and let the story unfold in a normal way. In Bandini you will notice that throughout the flashback there is no scene where this question will pop into your mind, ‘How can Kalyani know about this? How can she be talking about this?’ She is shown to be either in the vicinity or she has been told about it.

While the entire film as I said is a lesson in filmmaking there are three classic scenes in the film which definitely leave a lasting impression in the mind of the viewer. But before I go into those scenes I would like to draw your attention to this scene. 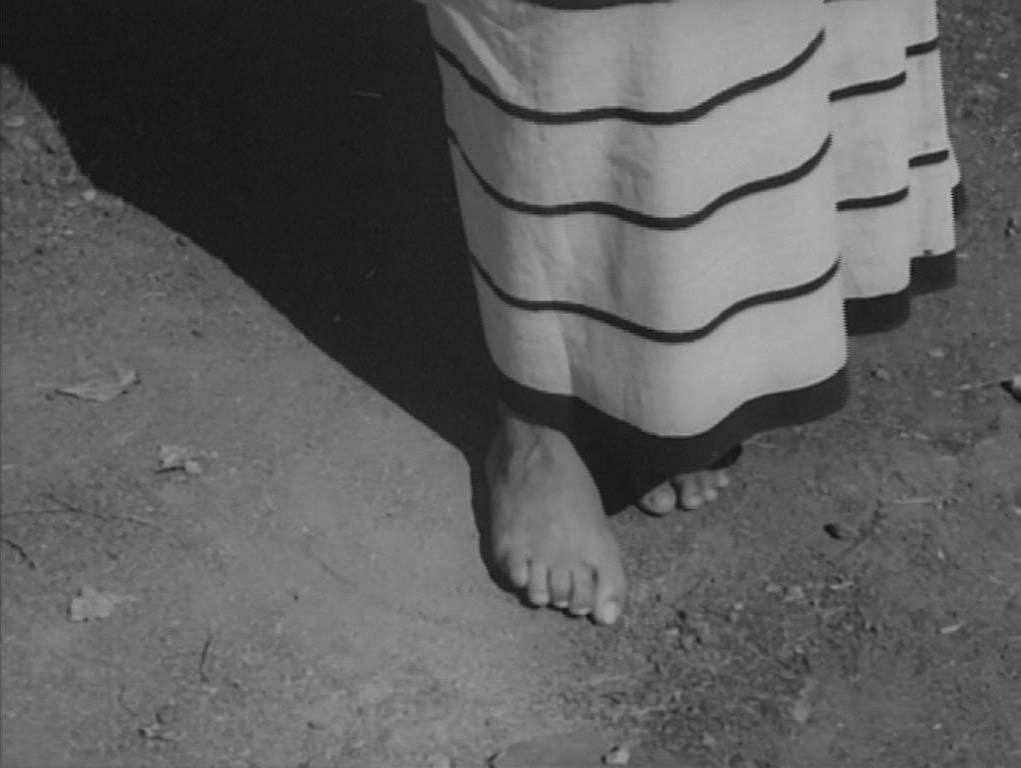 Here Kalyani is idly drawing a semi-circle on the ground as she is waiting for the doctor. This is a lovely touch, for unknowingly we may have often done it ourselves. This was much appreciated and I have noticed some directors imitating it in their films. Gulzar who was one of the assistant directors in Bandini, got Hema Malini to do it in a film and I think the film was ‘Khushboo’. I know Jaya Bhaduri also did it in some film but I am not sure whether it was in Sudhendu Roy's (Bandini’s art director) ‘ Uphaar’ or in Hrishikesh Mukherjee’s ‘Abhimaan’.

Now coming to the first scene which is a truly classic scene, is the scene where the doctor dejected after being rejected by Kalyani decides to leave his job and go back home. 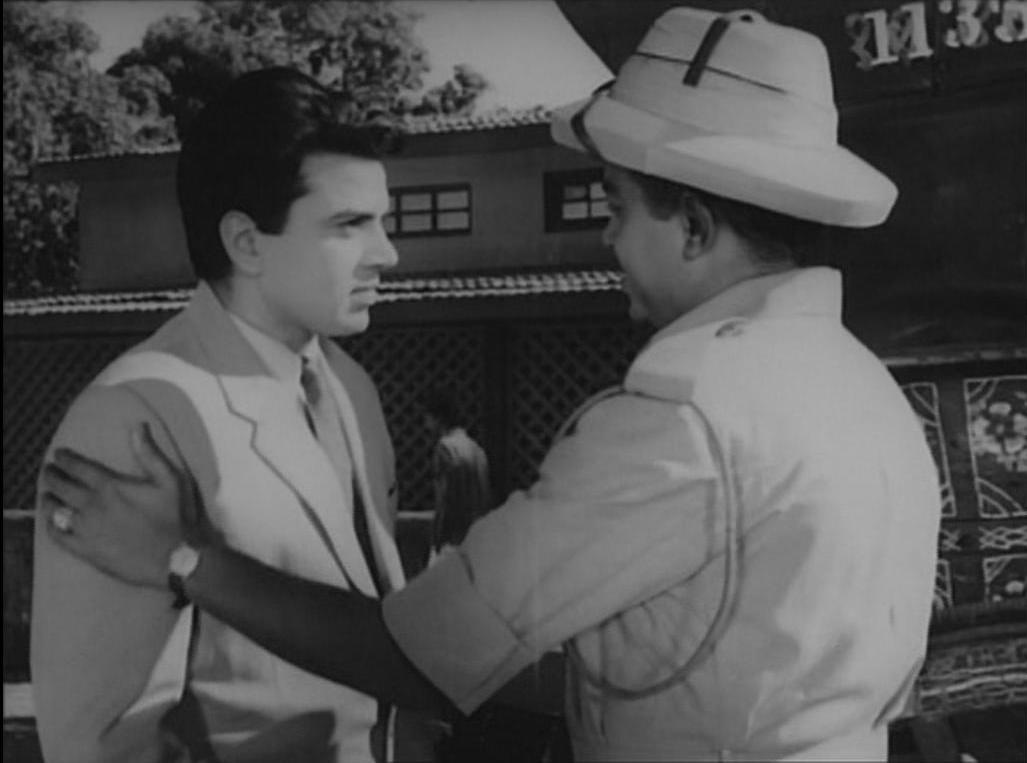 The scene unfolds with the doctor taking his leave from the jailor whom he regards as his elder brother and climbing into the tonga (horse drawn carriage), the scene cuts to Kalyani  a lonely figure, anguish writ large on her face, straining to hear the fading sound of the carriage. 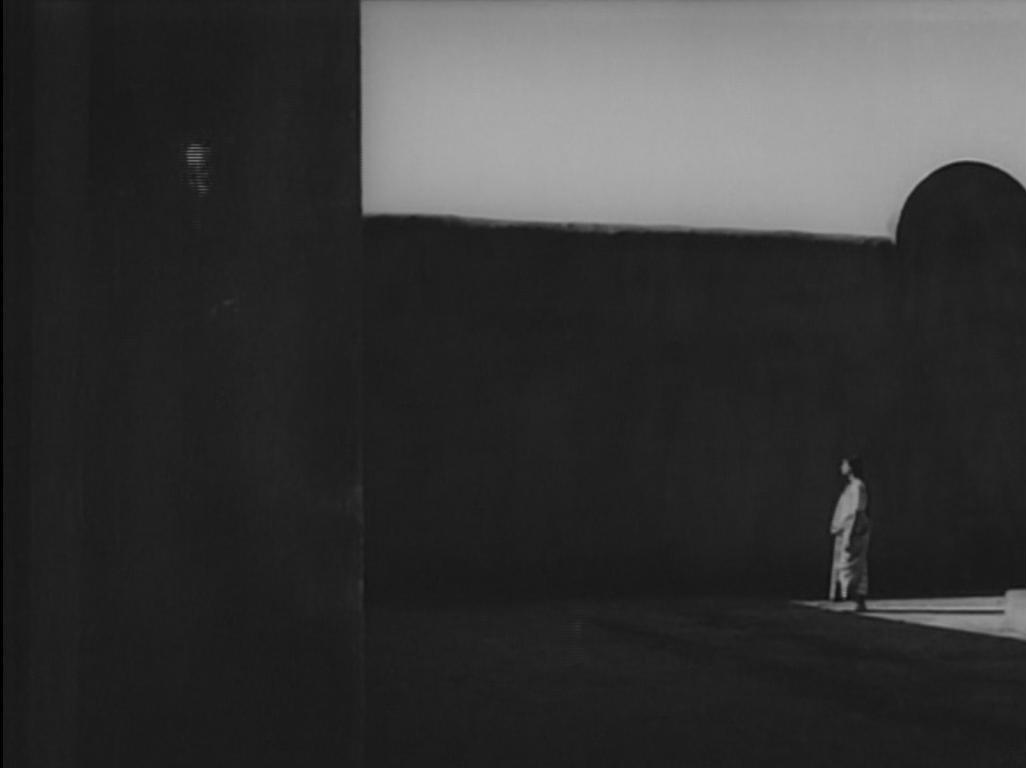 She is standing beside the high prison walls. Take a close look at the way this shot has been composed, everything is in the shadows with only Nutan in the spotlight or should I say sunlight, for that is sunlight streaming down on her. The looming wall, underlines her loneliness and despair. She almost looks trapped inside the jail. Background music has been used judiciously and sparingly. Before this scene unfolds, the jailor asks the doctor whether he really loves Kalyani or is it mere infatuation, while they are having this conversation the only sound you hear is that of the bugle. 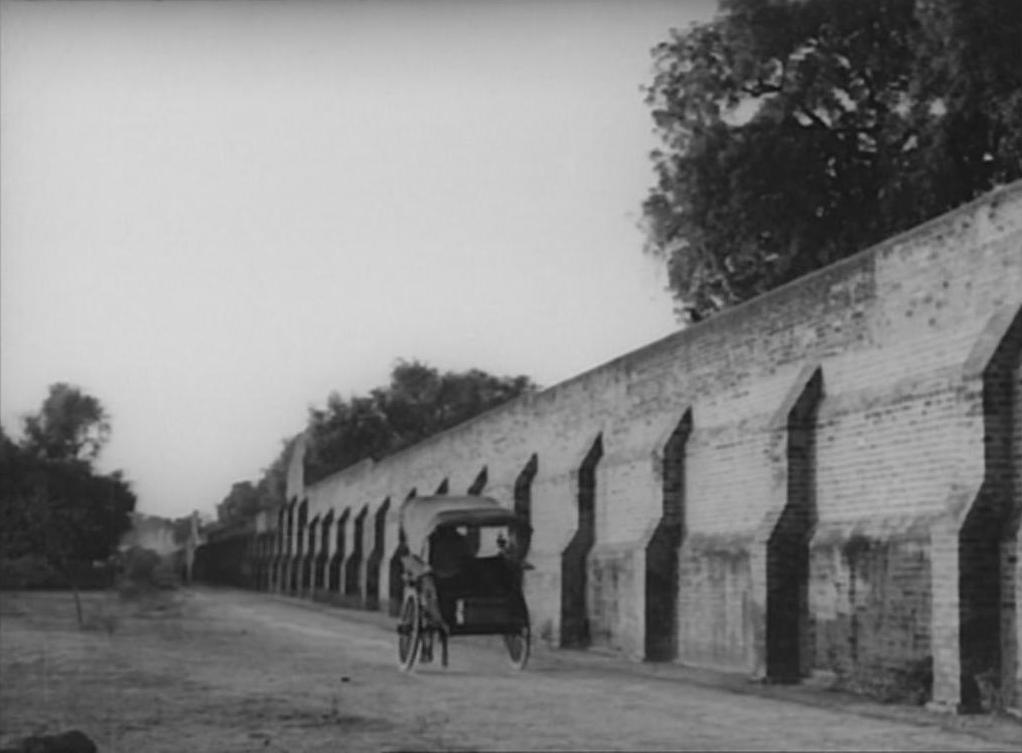 Later it is only the fading sound of the carriage. 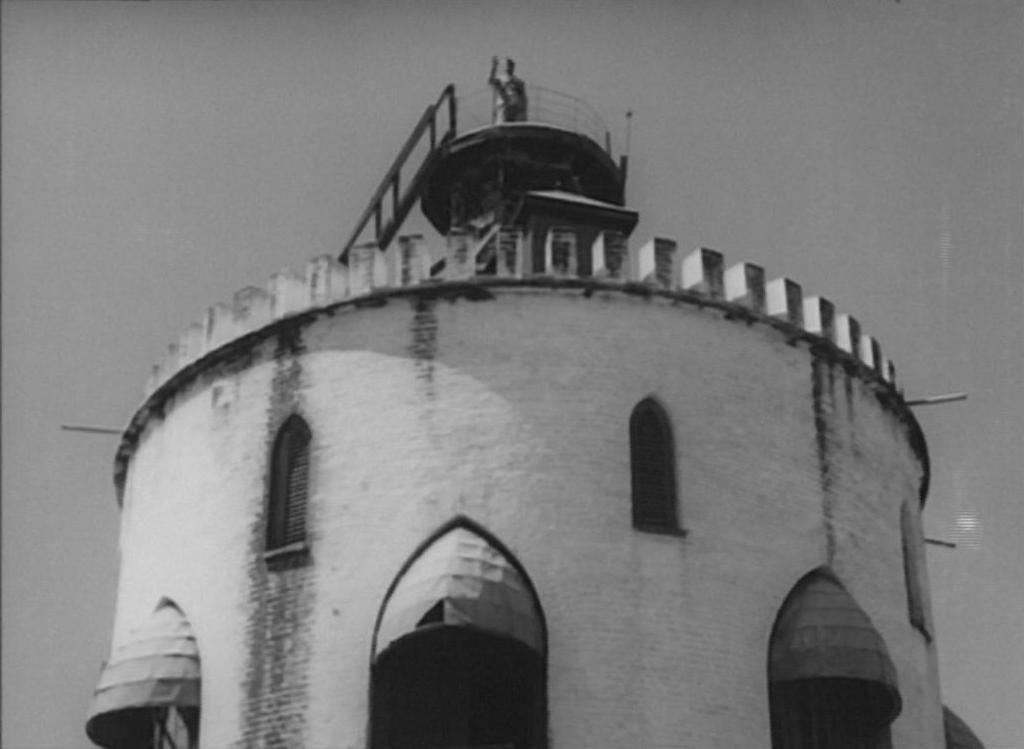 Then the scene shifts to a police guard saying, ‘sab theek hai’ (all is well). This-sab theek hai- has been used several times in the film, significantly it is shown every time something goes wrong, almost underlining the contradiction. In this scene for instance everything has gone wrong with Kalyani’s life, she is alone in this world and yet she is unable to accept the doctor’s proposal. The ‘sab theek  hai’ is once again used after a freedom fighter is hanged and his widowed mother faints unable to bear the loss of her son

I think I will take a break and continue with Bandini and some more trivia in my next post. In the meanwhile take a look at the scene I just described. Take care to increase the volume so that you can hear the background music. This is an old film and therefore the print is old as a result some noises have crept into the video, these are not part of the background score.